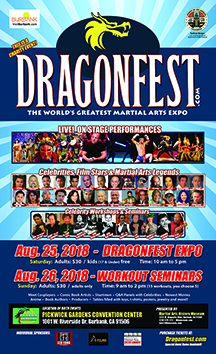 Burbank, CA – Television and film stars Matthew Moy, Crystal Santos, Phil Morris, Michael Jai White, Robin Shou, Lu Feng, Chuck Lidell are just a few of the special guests that will appearing at this year’s Dragonfest expo in Burbank. Regarded at the martial arts version of ComicCon of San Deigo’s fame, it is the most popular martial arts convention in the world and will take place on August 25 and 26 at the Pickwick Gardens Convention Center. Hosted by the Martial Arts History Museum, it is their biggest fundraiser of the year.

Dragonfest, now celebrating its 14th year, has relocated to a much larger facility to accommodate the growing crowds. Nearly 4,000 people will be packed in as they enjoy meeting martial arts celebrities, tv stars, movie stars, icons, champions and pioneers.

Among those guest include studio animators like Emmy Award Winners Paul Wee and Emmy  Christophe Vacher plus Jerome Lu, Elezario Del Rosario and more. Cosplayers will be part of the festivities including the ninja turtles.

Dragonfest is a two-day event. Saturday, August 25 will be filled with nearly 150 vendors with toys, weapons, clothing and books to buy. Stars will be on hand to meet up close and personal. Kids 17 & under with an accompaying adult, are FREE to Saturday's event.

Special guest this year will be Colonel Friend from the Red Tails.

For information on Dragonfest and pricing visit their site at www.Dragonfest.com.  It is hosted by the Martial Arts History Museum and 100 percent of the proceeds goes directly to support the museum. This is a CHARITY EVENT, tickets are also tax-deductible.

Special hotel rates can also be found at www.Dragonfest.com.