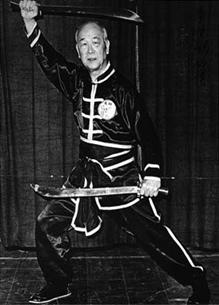 Burbank, CA – A statue of Ark Yuey Wong, the “father of kung fu in America,” is set to be unveiled this Saturday, February 22 at the Martial Arts History Museum. A bronze bust, designed by Mexican artist Ulysess Alvarez Barron, will be formally placed into the museum by the grandson of Wong, Seming Ma.

Ark Yuey Wong was born in 1900 in Canton, China and mastered the art of kung fu during his training at the Shaolin Temple. He immigrated to the West in 1920s and became an herbalist and highly acclaimed acupuncturist. He began teaching kung fu in Northern California to a group of Chinese relatives and students.

Chinese kung fu, unlike other Asian styles of martial arts, was considered a very secretive artform and was not allowed to be shared with non-Chinese. However, in 1960, Wong broke with a centuries old-tradition and became the first Chinese martial arts master to teach traditional kung fu to non-Chinese in the United States. Thereby, earning the title of the “father of kung fu in America.”

Contrary to Hollywood's depiction of history, it was Ark Y. Wong who is credited as the first Chinese master to teach kung fu to non-Chinese students which has spread to every nation in the world.

The influence of Wong can be felt in a variety of Hollywood films such as “Kill Bill,” “Kung Fu Panda,” “The Matrix,” “Man with the Iron Fists” and more. Kung fu has also been instrumental in the development of cartoons and television shows such as “Avatar: The Last Airbender,” “The Green Hornet,” “Xiaolin Showdown,” and more.

“This event provides an opportunity for many of the students he has influenced over the last fifty plus years to pay their final respect to his memory,” notes Matsuda. “Although Ark Y. Wong passed away in 1987, his pioneering acts of selflessness will never be forgotten. Two of our special speakers at the event include his student Doug Wong and acclaimed film director, Art Camacho.”

The tribute to Ark Y. Wong will begin at 4 pm. For additional information on the event and the Martial Arts History Museum, visit their website at Mamuseum.com. The museum is located at 2319 W. Magnolia Blvd., Burbank, CA 91506. The Museum is a non-profit 501(c)(3) organization. Email: info@mamuseum.com.