Asian Cultural Performances to be Highlighted at Dragonfest Expo 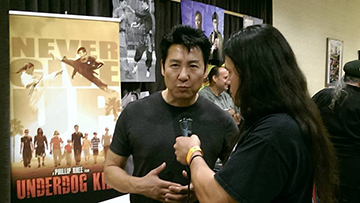 Burbank, CA – With the addition of major sponsorship from ilovekickboxing.com headed by Michael Parrella and funds from County Supervisor Michael Antonovich, has enabled the Martial Arts History Museum to include a variety of Asian cultural performances to its annual Dragonfest Expo in Van Nuys, CA.

The Dragonest convention, now it is 12th year, is proud to feature the world famous Shaolin Monks troupe. The Monks, on loan from the Shaolin Temple in China, has been entertained the nation for the past twenty years. They have opened the doors to Chinese culture and tradition and have been wooing audiences with the unique aerial techniques and mind-blowing movement.

Traditional Japanese Taiko drumming provided by Fumio Demura, will also be part of Dragonfest's stage performances. Chinese music as well as Hawaiian Hulu dancing will be appearing as well.

“This is a wonderful addition to Dragonfest. We are a non-profit organization and are very limited in our funds. Dragonfest is actually our biggest fundraiser for the year. Having funds to allow us to bring in Asian cultural performances takes us to a different level and attract new visitors to the expo,” says Michael Matsuda, museum president. “Sponsorship has allowed us also to move to a larger location which includes a stage area for our performances.”

In addition to stage performances, the expo will include some of the greatest anime artists in the world including Emmy Award Winning artists Christophe Vacher (Dreamworks), Paul Wee (The Simpsons), Jerome Lu (Star Wars) plus the Kano Kid and Eleazar del Rosario.

Tickets for the expo are only $25 at the door or early bird rate of $20 if purchased online before June 15. Visit MuseumDragonfest.com. Date is July 9 and begins at 11 am and ends at 6 pm. Dragonfest will be located at 7277 Valjean Ave. in Van Nuys, Ca. Kids are only $5.

“Dragonfest is our biggest fundraiser for the Museum so I encourage everyone to support the Museum by attending this event,” adds Matsuda.