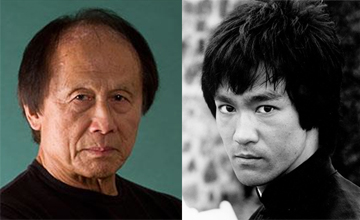 BURBANK, CA – This Saturday, November 19, the Martial Arts History Museum will be hosting a variety of events celebrating Bruce Lee's birthday, paying tribute to Leo Fong and topped off with a panel discussion on the famous fight between Bruce Lee and Wong Jack Man.

The event, which will begin at 4 pm, is a rare opportunity to get the real insights on what truly happened at this famous duel. “I want to set things straight and to explain what really occurred between Bruce and Wong Jack Man. I think this is very important and I think the best place to discuss it is at the martial arts museum,” says Bruce Lee's best friend, Leo Fong, (Pictured are Leo Fong and Bruce Lee.)

A special birthday cake will be brought in to commemorate Bruce Lee and Leo Fong's birthday. This will be followed with honoring the life achievements of Fong and completed with a panel discussion on the fight and Q&A for the audience.

Leo Fong is an icon and pioneer of health, fitness and safety within the martial arts. He was inducted into the Martial Arts History Museum's Hall of Fame in 2006. H is one of the earliest pioneers of Chinese Kung Fu in America and played a major role in opening the doors of Asian culture to American audiences. From actor, stuntman to producer, Fong has been part of over 71 films and television shows. From classic movies such as Low Blow to today’s Shadow Boxer, Fong was the first to make the transition from actor to producer.

Although born in China, Fong spent his youth in Arkansas where he faced prejudice and racism but still overcame it all to change history. “When I first came to America in the 1930s as a child, the other kids would sing ‘Ching-Chong Chinaman’ to me and I thought they were being nice and it didn’t occur to me they were making fun of me,” recalls Fong.

As one of Bruce Lee’s best friends in the early 60s, Fong witnessed first hand many of the roadblocks they both faced in opening up Kung Fu to a Western audience. “People can say a lot of things about Bruce, but I was there first-hand and witnessed what actually happened,” notes Fong.

An author of numerous books on the martial arts, Fong, now 88 years old, serves as as a Christian minister, teaching Tai Chi classes for the elderly and performs countless seminars and workshops on Kung Fu, Jeet Kune Do and many more.

“Leo Fong, now in his eighties, is not only quick and sharp, but his moves are still as powerful as they were in his youth,” says Martial Arts History Museum president Michael Matsuda.

The event will take place from 4 pm to 6 pm at the Martial Arts History Museum which is located at 2319 W. Magnolia Blvd., Burbank, CA 91506. Cost of the event is only $10 with desert to be served to the guests. For additional information, visit the museum’s website at MAmuseum.com. The museum is a non-profit 501(c)(3) organization and donations are encouraged.