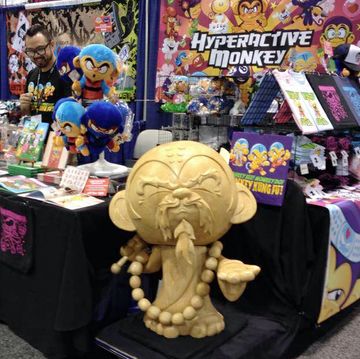 BURBANK, CA – The city of Burbank is surrounded by some of the most notable studios in the motion picture and television industry: Disney, Dreamworks, Warner Bros., Nickolodeon, the Cartoon Network and so many more. It is considered the media industry capitol of the world. Now, you can add the “martial arts capitol of the world” as Burbank will be hosting one of the largest martial arts conventions in America. The DRAGONFEST convention, which will take place on May 18, is a place in which a multitude of fans will be able to enjoy martial arts history and meet some of the greatest pioneers of the arts.

Thousands of fans are expected to attend the Dragonfest Convention, which will be  hosted by the Martial Arts History Museum, as they will enjoy the opportunity to meet icons, movie celebrities, champions and pioneers, plus support the Museum as well.

Resurrected after a 10-year hiatus, the Dragonfest Convention has been the largest event celebrating the martial arts industry on the West Coast. “Dragonfest was our biggest convention which ended over 10 years ago. Everyone has been waiting for its return and I’m glad the Museum took the reigns and is re-opening this magnificent event,” says Museum president Michael Matsuda.

Amongst the martial arts television and movie personalities which will be in attendance are Lorenzo Lamas, John Saxon of Enter the Dragon fame, comedian Master Ken, Queen of martial arts in films, Cynthia Rothrock, Rodney Kageyama of Karate Kid fame, Peter Kwong of Big Trouble in Little China and so many more.

The Dragonfest Convention is divided into a variety of areas: Celebrities, Authors, Artists, Film and Special Effects.

The authors section the event will include comic writer Lambert Chueng, SideKick Publications, Myriad Publications and the Museum Publications.

Bringing a new realm into Dragonfest will be the film and special effects area. Gorilla Pictures, the CNC Movie Factory, Traditionz pictures, The Gathering and others will highlight their new films and reveal their future projects. Special effects designers and sculptors that will have their work at the convention include such recognized names as Erick De La Vega, Koji Ohmura, Hiroshi Kategiri, Christopher Hernandez, Neil Winn, Mel’s Props and many more.

The Dragonfest Convention is a fundraiser for the Martial Arts History Museum. As a non-profit organization, 100 percent of all the proceeds will go to support the Museum.

“There are so many great pioneers leaving us so quickly and without a gathering like this, we many never see some of them again. Dragonfest, which I feel its so important that it’s being put on by the Museum, provides a place where we can celebrate our history together,” says film director Art Camacho.

Expectations are high for this event as support for the Museum is encouraged. “This is for the Museum. We are not a rich Museum and getting large donations has been a struggle, I feel this convention will help us tremendously. Even if you’ve never done martial arts before, this is a great event,” says Matsuda. “We won’t have these icons with us always and many have gone already, let’s show our support for them as well as well and be part of this event.”

For sponsorship information or to purchase tickets online, visit their website at www.MuseumDragonfest.com. The Martial Arts History Museum is located at 2319 W. Magnolia Blvd., Burbank, CA (818) 478-1722. The Museum Dragonfest convention will be held at the Holiday Inn Media Center in Burbank, CA.