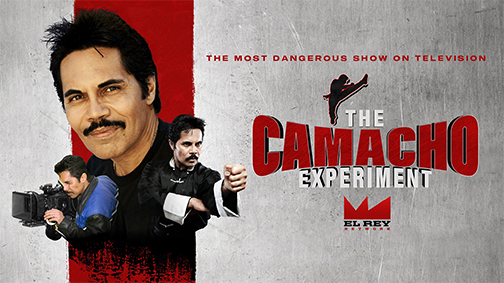 Burbank, CA – The news has been leaked on one of the newest shows to debut on the El Rey Network, “The Camacho Experiment.” Created and hosted by veteran film director Art Camacho, the Latin-themed television show which is set to be unveiled in November, will be the focus of a FACEBOOK LIVE Q&A on Monday, October 26, 2020 with the director and host of the show, answering questions.

Nicknamed “The Most Dangerous Show on Television,” The Camacho Experiment is filled with a series of unique interviews, jam-packed action, kick-butt workouts, and take-it-to-the-ring style of martial arts combat.

The first show to premiere will feature one of the greatest legends in kickboxing history, World Kickboxing Champion and World Boxing Champion, Graciela Casillas. Casillas will take you in-depth about her career, her history-making achievements, her personal journey, and her inspirations, topped off by knocking a few heads with some dynamic Kali stick teaching and demonstrations.

The show, which has been designed to benefit the Martial Arts History Museum, will feature six one-hour episodes, is lined-up with some of the greatest who’s who of martial arts icons. They include kickboxing great Benny “the jet” Urquidez; action movie star and tournament legend who has been dubbed the “Queen of the Martial Arts,” Cynthia Rothrock; 11-time World Kickboxing champion and multi-talented action film star Don “the dragon” Wilson; daughter of pioneer Ralph Castro and the “guru of martial arts fitness” who has her own show on the El Rey Network, June Castro; topped off with one of the most celebrated leaders of gang intervention and an early pioneer of kickboxing, Blinky Rodriguez.

SNEAK PEEK INTERVIEW
Camacho, who is credited with 20 films as a director, and nearly 50 films as a fight choreographer and stuntman, and has worked with some of the most iconic figures in Hollywood, including Steven Seagal, Armand Assante, Dolph Lundgren, Richard Grieco, and more, will be hosting a special one-hour FACEBOOK LIVE Q&A on Monday, October 26, 2020 at 11 am PST on his personal facebook page at https://www.facebook.com/camachoart.

“This is unlike any other show on television. Picture this: Take the suave style of Johnny Carson, the greatest talk show host of ‘The Tonight Show’ combined with the explosiveness of Bruce Lee on ‘Enter the Dragon,’ put them both in a blender and out comes The Camacho Experiment,” says Michael Matsuda, producer of the show and president of the museum. “Many thanks to the great people of the El Rey Network for supporting the efforts of the museum.”

The Facebook live “Sneak Peek” Q&A will provide a rare opportunity for the millions of martial arts enthusiasts from all over the world, to connect with Camacho, and ask him the details about the upcoming show and any other questions they may have about his film work.

For more information about the show or the El Rey Network, you can visit them at https://www.facebook.com/ElReyNetwork/.

For information about Art Camacho, you can visit his youtube channel at the following link https://www.youtube.com/channel/UCey0NlV2pDd2tqRSI2Y05_g or visit his facebook page at https://www.facebook.com/camachoart.

For information about the Martial Arts History Museum, visit http://www.Mamuseum.com.