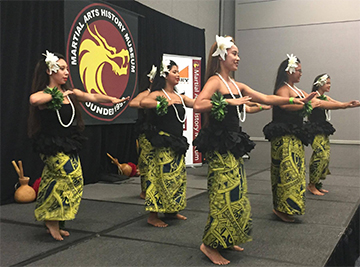 Celebrating its 13th year, Dragonfest is dedicated as a charity event with 100 percent of the proceeds going to benefit the Martial Arts History Museum in Burbank, CA. “Several thousands of people were able to enjoy a fun day of meeting and greeting their icons, buying martial arts items and even getting their names written in Chinese,” says museum president Michael Matsuda.

The event featured over 100 vendor booths that including Asian gift items, martial toys and weapons, stuffed animals, anime items, cosplay characters and even Bruce Tea. From children to adults, if you enjoy martial arts movies, you would have enjoyed Dragonfest.

This year, Dragonfest relocated to the Burbank Convention Center with positive results as thousands of fans enjoyed this unique festival. “My first book came out, ‘A Filmmaker’s Journey,’ and I thought that Dragonfest would be a great place to introduce it to the public and I was very pleased at my results. This is the platform for anyone that has anything to do with the martial arts and it was twice the size as last year. It was a great event for me,” says film director and author Art Camacho.

Hosted by the Martial Arts History Museum, a non-profit organization, this was their biggest fundraiser for the year. “We are making plans to relocate the museum from our small facility into a much larger location still within Burbank. Burbank is a great city and they have been graciously open to diverse cultures such as represented by the museum. It is our plans to continue to be a major part of Burbank’s cultural awareness,” adds Matsuda. “The museum is the only permanent facility in the entire city that has anything to do with diverse cultures.”

The museum is in need of a larger location in order to support the growing number of request for museum visits from many of the surrounding school districts. The goal of the museum is to teach young people about Asian culture and tradition and its connection with the martial arts.

“Last year’s Dragonfest was in Van Nuys but based upon our results and the cooperation of the Burbank Marriott Hotel and Convention Center, I think we have found a permanent home for Dragonfest,” concludes Matsuda.

Donations can still be made to the Martial Arts History Museum through their website at www.MAmuseum.com or visiting the facility at 2319 W. Magnolia Blvd., Burbank, CA 91506. (818) 478-1722 or email info@mamuseum.com.