Burbank, CA –The Martial Arts History Museum is pleased to announce the 2017 return of Dragonfest, the West Coast’s largest martial arts exposition attracting more than 3,000 attendees. Featuring hundreds of vendors, celebrities, and special events over two days, the event is happening from Saturday, August 5, 2017 which will be at the Los Angeles Marriott Burbank Airport Hotel and Convention Center, and Sunday, August 6, 2017 which will be a red carpet celebrity event at the Martial Arts History Museum also in Burbank. Tickets are $30.00 ($5.00 for children) and will be available at www.MuseumDragonfest.com

By expanding Dragonfest to a two-day event, the expo is able to introduce “Meeting with the Celebrities,” a red carpet event/mixer and Q&A session, providing fans with the opportunity to experience the Martial Arts History Museum, as well as meet celebrities face-to-face on Sunday, August 5, 2017 from 11 am to 6 pm. The Martial Arts History Museum is located at 2319 W Magnolia Boulevard in Burbank. “This event will allow people to spend a much longer time with the celebrities and pose with them for our red carpet entrance. There will be a question and answer period and I think of it as a huge VIP party in which you get to hang out with people like Don Wilson, Cynthia Rothrock and many others,” says museum president Michael Matsuda. 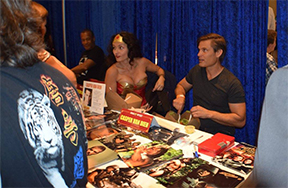 Throughout the expo, Dragonfest will play host to a large variety of Asian cultural performances including Chinese Lion Dancing, Japanese Taiko Drumming, Japanese harp, stuntfighting performances, Hawaiian Hula and Filipino Dance groups. Kids also have a fun time at Dragonfest as they partake in face painting, taking pictures with the Ninja Turtles and enjoying the cosplay characters.

“We are delighted to bring Dragonfest back to Burbank in 2017. The Martial Arts History Museum is located in the city of Burbank and having it return to our home town is very special for us,” says Matsuda. “We’re committed to being a strong part of this community.”

For booth reservation or to become a sponsor for Dragonfest 2017, please email info@mamuseum.com.