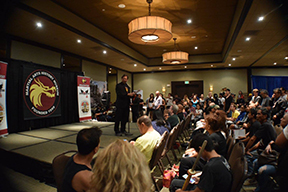 Dragonfest, which is noted as a fund-raising event for the museum, relocated from its smaller venue at the Holiday Inn in Burbank this year, to a much larger facility at the Airtel Conference Center in Van Nuys. This was a wise decision for the museum as record crowds of over 3,000 jammed the Conference Center.

“This was our best Dragonfest convention ever. Dragonfest started many years ago but ended about 2003. The museum resurrected the event three years ago and since then, we have doubled and tripled in attendance, says museum president Michael Matsuda. “This is a great event for the entire community and it is that wonderful community that made it a success. People flew in as far away as Australia just to be here.”

Dragonfest was filled with a huge number of martial arts icons, pioneers, champions, founders and history-makers. Among them were a number of recognized film stars including Casper Van Dien of Starship Troopers, Phil Morris of Seinfeld, Sasha Mitchell of Dallas and the cast of The Karate Kid, Big Trouble in Little China, The Martial Arts Kids, Sci Fighter, The Chemist and more.

Martial arts films stars Cynthia Rothrock (Queen of the Martial Arts) and Don “the dragon” Wilson were also on had to sign autographs.

Cosplay was also represented including Nick Palma, one of the original Ninja Turtles and Jennifer Wenger as Wonder Woman. The kids also had a great time with face painting and visting a number of toy vendors and anime artists.

“Artistry plays such a huge role in the martial arts and we were thrilled ot have some of the greatest artist of our generation on-hand. Books and many publications were also showing their wares including Heritage Source, Myriad Publications and more,” adds Matsuda.

Museum board member Art Camacho expressed, “This is the time when we all must gather together for a great cause, for the Martial Arts History Museum. Without a museum, all those wonderful accomplishments that so many sacrificed for, will be lost and forgotten. Let's not let that happen, Donate, donate, donate. Be part of something bigger than yourselves. Give back to the community that helped you become film stars, tv stars, champions, instructors, school owners and martial arts practitioners. We stood in line to buy our tickets at the movie theater to support you, let's give back to the community by making a sizable donation.”

The Dragonfest convention packed out the entire hotel and made use of all their restaurants and facilities. “We are always glad to have then event close to a hotel so that our visiting guests and enjoy the event, plus, we love supporting the hotel by bringing them more customers. The last two years, we sold out every room at the Holiday Inn, we were happy to to that at the Airtel Hotel,” says Matsuda.

For more information about Dragonfest or the Martial Arts History Museum, visit their website at Mamuseum.com or call (818) 478-1722. The museum is a Non-Profit 501(c)(3) organization and is completely supported by donations and memberships.