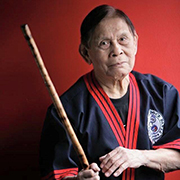 Burbank, CA – One of the last remaining legends of the Filipino Escrimadors, Ciriaco “Cacoy” Canete, passed away earlier today. Canete, a grandmaster in the art of Escrima/Kali, was one of the final group of pioneers that helped re-introduce the stickfighting art of Escrima to the Filipino culture. In 2006, he was honored for his efforts by being inducted into the Martial Arts History Museum's Hall of Fame. He was 96.

Canete served as the president of the Cacoy Doce Pares Association, an organization that was dedicated to restoring Filipino history by bringing back the traditional arts of Escrima/Kali. An artform that had been forbidden during the Spanish occupation. It was through Canete, that he was not only able to continue the mission of Cacoy Doce Pares, but became the arts biggest advocate by spreading Escrima across the globe.

During the Japanese occupation, he served with the U.S. Armed Forces as a 2nd Lieutenant Combat Intelligence Officer.

Canete became one of the highest ranking individuals in the art of Escrima and continually traveled across the world teaching seminars and workshops up until his early 90s.

“Cacoy Canete was a very humble but very powerful man. He played such a vital role in restoring Filipino traditions and culture and helped reinvigorate the art of Escrima. In 2006, the museum gave a wonderful tribute to this icon figure. He changed the world,” says museum president Michael Matsuda. “In the last 10 years we have lost many great martial arts pioneers, Cacoy Canete will be missed by all.”

A black belt under the Cacoy Doce Pares system, David Ortiz remarked, “this is a very personal loss to me. He opened my eyes to the Filipino arts and I am very sadden by his passing.”

Cacoy Canete will be buried in the Philippines.