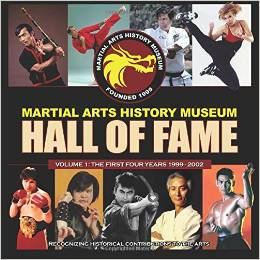 Burbank, CA – Although Asian forms of martial arts took its first step into Western civilization over 150 plus years ago, this is the first time an official book has been released recognizing the martial arts' most significant pioneers, champions, founders and more. Entitled “The Martial Arts History Museum's Hall of Fame,” this is the first book ever to hit the market depicting its most revered pioneers. Created by the Martial Arts History Museum, this book formally enlightens the non-martial arts public to the impact Asian forms of martial arts have had on American society.

Volume one of a four-part series, the Hall of Fame book not only provides a listing of each individual inducted into the martial arts' most prestigious club, but it dedicates six pages of each Hall member and the historic impact they made that changed American history. This coffee-table style book is an official, 300-page publication that reveals the achievements of history-making pioneers,

“This book is the first time our Hall of Fame has been officially documented in book form. Granted, there are many types of awards in the martial arts community, but this book is from the Museum itself and it accurately documents what these pioneers did to make an impact on the West,” notes Museum founder Michael Matsuda. “The Hall of Fame, which began in 1999, inducts ten individuals each year for their historic accomplishments. This book is volume one and it highlights the years 1999 to 2002, which amounts to 41 inductees being recognized.”

Similar to the Baseball Hall of Fame, the Martial Arts Hall of Fame bestows a professional and unique look at the martial arts industry as a whole. It opens the doors a world that is followed by millions upon millions of practitioners across the globe, all of which have been connected in some part to the Museum's pioneers.

“The Hall of Fame book sheds a light into a hidden world of history-makers. People like Ark Y. Wong, Jhoon Rhee, Bong Soo Han and many more who are not film and TV celebrities, yet what they did not only opened the doors to the arts, but made such a loud noise that their efforts can still be felt today,” says Matsuda. “If you don't know anything about the martial arts, this is a great book for you. If you have studied the arts for a long time, this is also a great book for you to learn about those who paved the way before us.”

The Martial Arts Hall of Fame book is available on Amazon.com with the following link form the Museum store noted here: http://martialartsmuseum.com/store/

The Martial Arts History Museum is located at 2319 W. Magnolia Blvd., Burbank, CA 91506. Mamuseum.com. The Museum is a Non-Profit 501(c)(3) organization and is operating completely by donations and memberships.