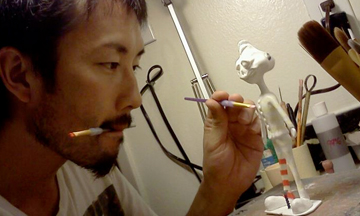 BURBANK, CA – Some of the world’s most renowned artists, sculptors, illustrators and creature makers will take center stage at the Martial Arts History Museum’s DRAGONFEST CONVENTION to be held on May 18 at the Holiday Inn Media Center in Burbank, CA.

Several thousands of movies fans, monster-makers, artists and more are expected to be lining the streets to see the latest work from some of the masters of the art. “Dragonfest is a convention that focuses on the primary areas of the Museum: Art, History, Culture, Tradition and Media. Our FX area and our movie area will focus on the newest martial arts films and the latest sculpture creations by some extremely talented individuals,” says Museum president Michael Matsuda.

Many of these artists work has been featured in the Fantastic Four, X-Men, The Butler, and many have had their sculptures at MonsterPalooza, Son of MonsterPalooza and more.

“FX plays a huge role in today’s action films. They may not be martial arts films, but all their techniques and movements are from the martial arts,” adds award-winning film director Art Camacho.

A variety of new films will also be on display including the Martial Arts Kid, The Gathering, The Real Miyagi and more.

Dragonfest is a convention in which everyone has the opportunity to meet martial arts celebrities up close, purchase unique weapons, buy the latest T-shirts, etc.

The Dragonfest Convention is a fundraiser for the Martial Arts History Museum. As a non-profit organization, 100 percent of all the proceeds will go to support the Museum.

For sponsorship information or to purchase tickets online, visit their website at www.MuseumDragonfest.com. The Martial Arts History Museum is located at 2319 W. Magnolia Blvd., Burbank, CA (818) 478-1722. The Museum Dragonfest convention will be held at the Holiday Inn Media Center in Burbank, CA.