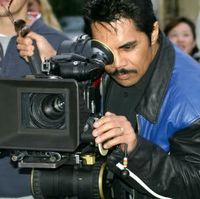 BURBANK, CA --- To honor his contributions to the martial arts industry and to recognize his notable impact within the Latin youth community, the Martial Arts History Museum will be honoring film director Art Camacho on April 5 at the Museum.

Designated as “Art Camacho Day at the Museum,” the ceremonial festivity will begin at 4 pm with a variety of distinguished guests scheduled to pay tribute to this pioneering individual.

Growing up in the streets of Southeast Los Angeles and sinking into drugs and gangs, Art Camacho managed to turn his life around by redirecting his energy into learning martial arts. “The martial arts gave me confidence and respect for myself. It really changed me,” notes Camacho.

The martial arts also played a key role in Camacho's future as he was able to establish a career in film and television. Beginning as a stuntman, he worked his way into becoming one of the most highly regarded fight choreographers. Through hard work and perseverance, he became the only martial artists to successfully make the transition into the director’s chair.

Today, Camacho is an award-winning director and is considered as one of the most influential representatives of the Latin community within the martial arts. He has directed over 15 movies.

Working with “at risk” teens and young adults, Camacho runs a series of seminars to encourage school children to turn from gangs and establish goal-setting frames of mind by becoming involved in the martial arts and films.

In 1991, shortly after the riots in South Central Los Angeles broke out, Camacho was one of the first group of entertainment celebrities to travel to the area to work with the youth at the local schools and churches.

“There are many film producers and directors that create tribute films to honor the martial arts and that's wonderful. Art Camacho, however, takes the real step of tribute by playing a major role in the development of a museum to honor the arts,” says museum president Michael Matsuda. “This to me, is someone who truly gives back.”

Through his numerous workshops and seminars, Camacho is proud to have many of his students move on to work in major films and television shows including the Avengers, the Matrix, Batman, Iron Man, Hawaii Five O, Banshee, Revolution and many more. Camacho is currently in pre-production for the film, Final Payback 2: Bad Guys Finish First.