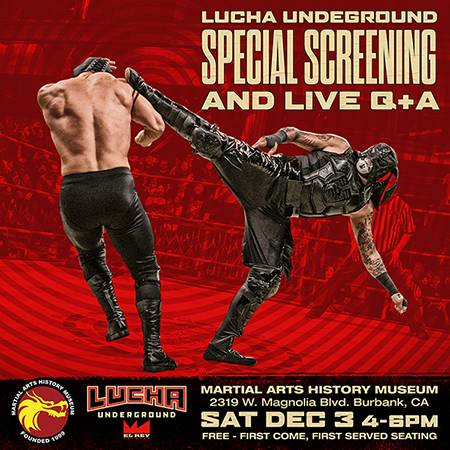 Burbank, CA – Making a special appearance at the Martial Arts History Museum this Saturday, Dec. 3 at 4 pm are the cast and crew of one of the most action-packed series on television today, El Rey Network's “Lucha Underground!” Free to the public, this red carpet event will feature a special screening of Lucha Underground plus and exciting Q&A session.

Lucha Underground, which began its first season in 2014, has been one of the most exciting shows on television. Patterned after the traditional Mexican masked wrestlers of the1940s, Lucha Underground features wrestlers from the American Independent circuit and the Asistencia Asesoria y Administration (AAA), one of the biggest wrestling promotions in Mexico. Lucha Underground is now in its third season.

Through this event, the Martial Arts History Museum will celebrate the impact of wrestling in the martial arts industry by featuring a number of Lucha wrestlers including its first champion, Johnny Mundo and Ricky Reyes. As part of its Q&A session, the panel will include Showrunner Eric Van Wagenen, Executive Producer Skip Chaisson and Head Writer Chris DeJoseph.

As a special bonus, the costume worn by champion fighter Penatgon Jr. will be unveiled and donated to the museum for permanent display.

“This is a huge event for us at the museum. I've been a fan of Mexican wrestling since I was a little kid and it has always had an impact on my life. Lucha Underground has renewed that love I had for wrestling and having one of their costumes here at the museum will open a new chapter in martial arts history,” says museum president Michael Matsuda.

The event will begin with a red carpet picture taking opportunity at 3:30 pm and the special screening will begin at 4 pm with a Q&A immediately following. Seating is limited so early attendance is encouraged.

For more information on Lucha Underground visit Luchaunderground.com. For information about the museum, visit mamuseum.com. The museum is located at 2319 W. Magnolia Blvd., Burbank, CA 91506. Parking is free and available in the parking structure next door.

The Martial Arts History Museum is a Non-Profit 501(c)(3) charity organization and donations are encouraged.