Burbank, Ca – This month, the Martial Arts History Museum, the world’s first and only museum of its kind, celebrated its 20th anniversary in the city of Burbank, CA. Created by martial arts historian, magazine publisher and founder Michael Matsuda, the museum has been a beacon and home for the martial arts worldwide.

Visited by thousands of martial arts fans, enthusiasts and practitioners, the museum provides an historical look at the culture, history, art, music and traditions of the martial arts. The museum focuses on the impact martial arts made in each country and the positive influence it continues to make on Western civilization and throughout the world.

“It has always been my hope that those who have benefited most from the martial arts, those who have made a career and a wonderful living doing martial arts films would give back to those who have supported them, but sadly, none of them have. So, it has been up to us, the community that raised enough funds to get the museum off the ground,” notes Matsuda. 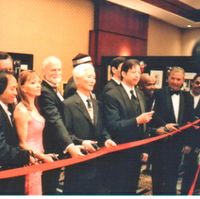 First ribbon cutting for the Museum

According to Matsuda, the twenty-year journey has not been an easy one. They began as a traveling exhibit taking the museum across country until they landed in the city of Santa Clarita, CA. After a year, they relocated to the city of Burbank, CA which has been their home ever since.

“Many of our pioneers of the martial arts, those who gave up their home and relocated to the West, endured prejudice, racism and discrimination, but still, they brought their martial arts to America and changed the world. As a result, martial arts schools spread throughout the nation, nearly every action film today includes martial arts, it has paved the way for mixed martial arts and continues to plays a major part in the multi-billion-dollar industry of video games,” notes Matsuda. “It is only right that we should have a museum to give respect and pay honor to our history.”

Through the last two decades, the museum has been an important part of the city of Burbank. By opening their doors to work with those physically and mentally challenged, seniors suffering from Alzheimer’s and dementia, kids of need and a variety of other charitable organizations, the museum continues to serve the community.

To keep its doors open, the museum hosts a number of fundraising events such as craft fairs, book signings, honor events and their primary fundraiser, the Dragonfest martial arts convention.

“The martial arts changed my life. If it has changed yours, then let’s do a little go give back by supporting the museum,” concludes Matsuda.

The Martial Arts History Museum is located at 2319 W. Magnolia Blvd., Burbank, Ca 91506. Donations can be given on their website at http://www.MAmuseum.com.

This video is a look at their 20-year history: https://www.youtube.com/watch?v=1xyxpMURkWU