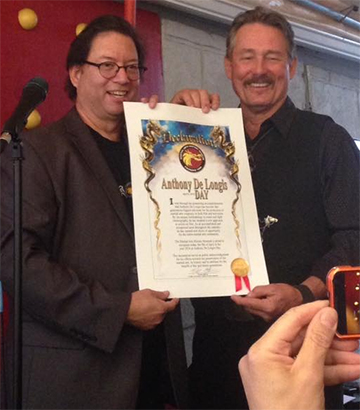 “Anthony De Longis took the opposite road to success as he was first an actor, then became a martial artist and through this opportunity, he was able to transform action films using his own methodology for fighting, weaponry and more,” says museum president Michael Matsuda.

De Longis is considered as one of the most unique and talented actors, fight choreographers and stuntpeople in both film and television. Recognized by many from his principal role in Star Trek: Voyager as the Kazon leader Maje Culluh, Delong has appeared in over 160 films, television shows, documentaries and more.

Inspired by the swordplay of Zorro, the Three Musketeers and the Count of Monte Cristo, De Longis became one of the most talented fencing experts in Hollywood. With a starring role in the Highlander television series, the Adventures of Sinbad and iCarly, he has been able to bring new awareness to fencing.

“Although Anthony is a superb actor who is also known for riding skills, Western gun shooting and outdoor ruggedness, many of us in the martial arts world know him for his deadly and accurate skills using the whip,” adds Matsuda.

De Longis became the man behind the whip techniques of Indiana Jones, Batman and a variety of Western-themed films.

De Longis career has spanned from acting, voice over, opera, motion capture and theater. He is starred or guest starred in many blockbuster films including Fearless, Roadhouse, Masters of the Universe, Circle of Iron, Jaguar Lives, Boomerang, the Sword and the Sorcerer, Bablyon 5, ER, General Hospital, Revolution and Grimm, to name a few.

“Every month the Martial Arts History Museum takes time to honor those significant achievements who have become the biggest advocates for the martial arts. It is through their efforts that the martial arts has an average of 27,000 schools spread out across America alone. The martial arts has a way of changing peoples lives, creating self-esteem, prevention of bullying and opens the doors to setting new goals. Anthony De Longis is one of those kind of people that we are proud to honor,” concludes Matsuda.