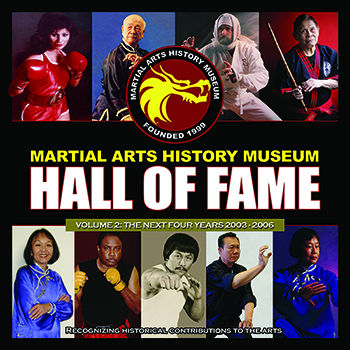 Burbank, CA – A number of martial arts dignitaries made a special appearance at the Martial Arts History Museum in Burbank recently to offer their signatures to the Museum's Volume 2 of their Hall of Fame book collection. Douglas Wong, Kung Fu historian, author and producer Leo Fong, star of GI Joe 2 and pioneer Carrie Ogawa-Wong and Wen Mei Yu offered their “John Henry's” to support the Museum.

“It was a tremendous evening as we gathered several of the greatest pioneers in the martial arts to be part of the book signing event,” says Museum President Michael Matsuda. “Each of them either graced the cover of Volume 1 or Volume 2 and it was a thrill for the whole community to enjoy.”

A festive crowd were glad to meet many of the Museum's Hall of Famers and many of them brought the covers in which the artists appeared on just to get their signature. “I'm happy to do anything to support the Museum,” says Kung Fu icon Doug Wong.

The Museum Hall of Fame Volume 1 was released in January of 2015 and although Volume 2 was released earlier in the year, this was the only time in which many of the pioneers could gather.

“The Museum's Hall of Fame books are part of a six-part series. Each volume is 300 pages and reflects the historical contributions of each pioneer. Six pages are dedicated to the inductee. It is not a book of biographies, rather, it is a look what these individuals did to change history,” says Matsuda. “Volume 1 covers the years 1999 to 2002 and honors 41 individuals. Volume 2 covers the years 2003 to 2006 and focuses on 44 individuals.”

The Martial Arts History Museum comes out with a new book every year. “A hall of fame should be the hardest thing to get into, not the easiest. That's why the Museum only recognizes this hall as the official hall for the martial arts community. Because it is so strict on its requirements and demonstrates the historical impact as a whole to the martial arts,” adds Matsuda.

The Museum does not select the members, the past Hall of Famers are given the opportunity to nominate one individual per year.

Both Volume 1 and Volume 2 have been the Museum's biggest sellers thus far.

To purchase these books, you can visit their website at http://martialartsmuseum.com/museum-store/ or go directly to Amazon.com to locate both of them.

The Martial Arts History Museum is located at 2319 W. Magnolia Blvd., Burbank, CA 91506. Mamuseum.com. The Museum is a non-profit 501c3 organization and donations and contributions are accepted.