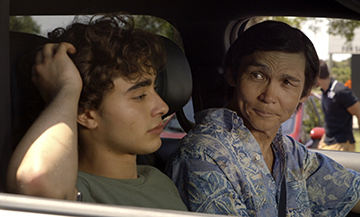 Burbank, CA – Bullying can affect everyone with a negative impact on all those involved. From the victim to the observer, it has horrific repercussions both mentally and physically. As a result, kids develop a lower self-esteem, have difficulty with coping skills and an increase of anxiety and unhappiness. In many cases, it has lead to substance abuse and even suicide. The Martial Arts History Museum, along with the producers of Traditionz Entertainment, have begun the first stages of a new Anti-Bullying program with the release of a new film, The Martial Arts Kid.

Bullying is complex and there isn't always one resolution to prevent it and with the introduction of a variety of social media programs, cyber-bullying has taken bullying into a whole new level. “Bullying can have a severe impact on a child's life with scars that will never heal. This is why I feel it is so important that the Martial Arts History Museum can become an alternative in addressing these situations,” notes museum president Michael Matsuda. “Learning a form of martial arts isn't just about protecting oneself, it's about building self-esteem and confidence. Bullies enjoy picking on those who they feel can't defend themselves or those who have difficulty in their social skills. The museum opens a door to a wide variety of choices which they can use to re-build their confidence.”

The Martial Arts Kid is a new film that looks at Anti-Bullying first hand. Produced by Traditionz Entertainment, it follows the life a teenager, who is relocated to new city and a new school and is immediately put into a bullying situation. Through his uncle and aunt, both martial arts instructors, he learns to not only protect himself, but how to better himself and become a more confident individual. His attitude toward life changes and he becomes a better young man as a result.

“Many people think that physical awareness such as martial arts should not be a resolution for Anti-Bullying, but it's not about that at all. It's rebuilding confidence and self-esteem, its helps you become more discipline and be able to push toward a goal. Nine out of ten times, the person won't even need to use their martial arts skills because of the confidence that others will quickly see in that person,” says Matsuda. “But having those skills, having the ability to block a strike and knowing you have that option is a priority.”

“Having a film about anti-bullying is a wonderful start. Through grants and donations, an anti-bullying campaign will be a wonderful thing for the community and by having it on film, it goes across the world,” says Matsuda. “Children deserve to have a fun and happy environment. It's hard enough growing up and being bullied has such a negative and lastly impact on a young person. Join the Martial Arts History Museum in helping us to combat and defeat bullying.”

The Martial Arts Kid will begin its campaign with a theatrical release in both New York and Los Angeles. These include:

For film listing and additional showings or to contact Traditionz Entertainment, visit http://www.martialartskidmovie.com/press

For information about the Martial Arts History Museum, visit http://www.Mamuseum.com