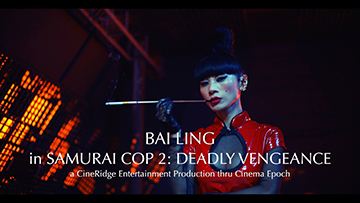 BURBANK, CA – One of the most unique and memorial artifacts of martial arts film genre is the “Flying Guillotine.” First debuted in the movie of the same name, “The Flying Guillotine” in early 1970s, over a dozen films have used this legendary weapon. Coming to theaters this week is the release of Samurai Cop 2: Deadly Vengeance, is the latest film to use the Flying Guillotine. Along with the entire cast of the movie, the actual Guillotine artifact will be unveiled at the Martial Arts History Museum this October 10 at 5 pm for all to enjoy. This is a FREE EVENT put on by the Museum.

Filmmaker Gregory Hatanaka and the starring cast of the film will take part in the unveiling and will include an exclusive red carpet photo session for the stars of the film. “It’s also the birthday of Samurai Cop 2 star Bai Ling, so please come out to join in on the festivities. Please note that this is a free event to accommodate the fans,” says Hatanaka.

Samurai Cop 2: Deadly Vengeance will host an exclusive screening on Friday, October 9 and Saturday, October 10 at the Laemmle Noho Theatre at 7:20 pm in North Hollywood, CA. Hatanaka (Mad Cowgirl, Blue Dream) and the stars of the film will conduct a Q and A after the film. More screening dates to be announced soon.

The Flying Guillotine display will be unveiled at the Martial Arts History Museum, at 5 pm and is a FREE EVENT for all to enjoy. The Museum is located at 2319 W. Magnolia Blvd. in Burbank, CA.

For tickets to the special screening of Samurai Cop 2, can be purchased at this link: www.laemmle.com/films/39604