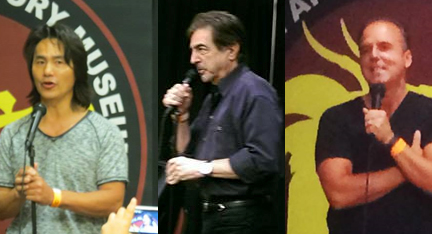 Burbank, CA – Thousands of martial arts enthusiasts flock into Burbank to take part in ComicCon-style martial arts convention. Called Dragonfest, it is hosted by the Martial Arts History Museum as a charity event to raise funds to keep the museum operational. The expo, which took place this past July 18 and 19, brought in some of Hollywood elite including Joe Mantegna from Criminal Minds, Steve Oedekerk from Kung Pow Movie, Ace Ventura and more, Robin Shou of Mortal Kombat fame, Dallas' Sasha Mitchell and Best of the Best' Phillip Rhee.,

The Holiday Inn Media Center's Grand Ballroom was filled to capacity as visitors came from all across the globe to enjoy the martial arts' one and only type of martial arts convention. In addition to Hollywood stars, martial arts icons and pioneers each had a booth to meet and greet their fans. The list included Don “the dragon” Wilson, Cynthia Rothrock, Fumio Demura, Art Camacho, Benny “the jet” Urquidez, Tak Kubota, TJ Storm, Leo Fong, Douglas Wong, Carl Totton, Carrie Ogawa-Wong, Greg Hatanaka, president of Cinema Epoch, Eric Lee, Olivier Gruner, Ed Parker and many more.

The Teenage Mutant Ninja Turtles made an appearance as well as hula dancing by Michelle Manu, unique demonstrations and clips from the martial arts industries latest films. Plus some the latest toys, gadgets and martial arts weapons.

“This was unlike any event in the martial arts community. It is the only real professional event of its kind and it brings in people from all over the globe to meet their icons,” notes award-winner film director Art Camacho. “This is our big event for the martial arts, which has millions of participates worldwide.”

Hosted by Museum president Michael Matsuda, it was an exciting day for the martial arts world as KTLA covered the event LIVE.

For information about donating to the Museum, please visit Mamuseum.com or call (818) 478-1722. The Martial Arts History Museum is a Non-Profit 501(c)(3) organization.