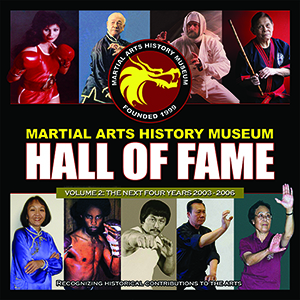 Burbank, CA – The hall of fame, any hall of fame, serves as a special tribute to those honored individuals who have made a significant and historic impact on society. Reserved for those select, gallant pioneers who have overcome all odds and have become champions, founders and legends. This week the Martial Arts History Museum is proud to release their second volume of a four-part series highlighting those significant achievers who have been inducted into the arts' most prestigious club.

The “Martial Arts History Museum's Hall of Fame: Volume 2” features the next four years 2003 – 2006, Volume One covered the years 1999 – 2002. Forty-four trailblazers are highlighted with six pages dedicated to their accomplishments in this 300-page collector's book.

“The Museum's Hall of Fame is unlike any other in the industry. Considered by the Museum as the official hall of fame for the martial arts community, it is the hardest hall to get into, as it should be,” says Museum president Michael Matsuda. “These series of books are the first printed listing of the hall of fame for the martial arts industry. It is not laced with biographies, rather, it reveals why each individual was inducted into the Museum's Hall of Fame and what they did to change history for the better.”

“When the Martial Arts History Museum's Hall of Fame arrived, it instantly distinguished itself from the crowd,” notes martial arts historian John Corcoran.

The hall of fame is considered as the epitome of a person's career. It is something that serves as a tribute for their sacrifice and pays honor to their undeniable accomplishments.

“Volume 1 became our best selling item for the Museum. Volume 2 is a wonderful addition and a real collector's item for any martial artists. It's wonderful to know who our pioneers are, but more significant to learn what they did to change our lives for the better,” adds Matsuda.

The Martial Arts History Museum is a non-profit organization and is fully supported by donations and memberships. The Museum is located at 2319 W. Magnolia Blvd., Burbank, CA 91506. Mamuseum.com. (818) 478-1722.