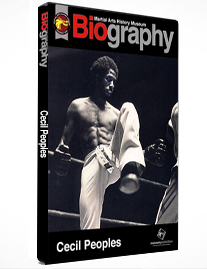 Burbank, CA – In the 1970s, a new evolution of martial arts occurred, the introduction of kickboxing. Until then, karate tournaments were made of primarily sparring techniques with just quick strikes to the body. This all changed when competitors called point fighters took their craft into the boxing arena and when the dust had cleared, only a handful became kickboxing pioneers. One of those few were Cecil Peoples. The Martial Arts History Museum is proud to release its latest biography of kickboxing pioneer Cecil Peoples now available on Amazon.

Born in Carbon Hill, Alabama, a young Peoples moved to Los Angeles and learned that a karate teacher named Bill Ryusaki was teaching martial arts in the neighborhood. “I saw a tv show and there was a guy doing a demonstration, and it was Bill Ryusaki. He mentioned where his school was located, and I had my dad drive me down there, and I signed up, and that changed my life forever,” adds Peoples.

Peoples had been an elite baseball player. In fact, he and his cousin Gary Mathews were recruited into the minor leagues. At the time, Peoples was part of the Pittsburgh Pirates minor league baseball team. However, once he signed up for karate, he gave up baseball to pursue his new dream of becoming a master in karate.

“I knew from my first day of lessons, I could no longer think about baseball, I could only think about karate,” says Peoples.

At the time, tournament or point fighting was very limited. Like a game of tag, competitors wore thick foam dipped gloves and foot protection. Fights were quick, sudden bursts of speed, and once an opponent was struck, time was called, and points were given accordingly. During the mid-1970s, full-contact karate, aka kickboxing, had begun to take root. Three-minute rounds and knockouts were the new norm, and point fighters faced getting actually hit in the face and knocked out. “It was a disaster. The greatest point fighters found out how it really was to get hit, and they jumped out of the ring as quickly as they jumped in. Only a handful like Benny Urquidez, Bill Wallace, Joe Lewis, and Cecil Peoples were able to make a successful transition into this new sport,” says museum president Michael Matsuda.

The Cecil Peoples Biography DVD reveals the historical journey of this fantastic competitor and how he changed the world through sport karate.

The biography of Cecil Peoples is one of a collection of a series of biographies released by the museum to preserve the history and life of its hall of fame inductees and significant achievers. “These biographies will be part of the museum’s hall of fame wall in the near future,” adds Matsuda.

The Cecil Peoples biography is now available on Amazon.com for all to enjoy through the museum’s website: https://martialartsmuseum.com/museumstore/

For information about the Martial Arts History Museum, please visit their site at http://www.mamuseum.com.