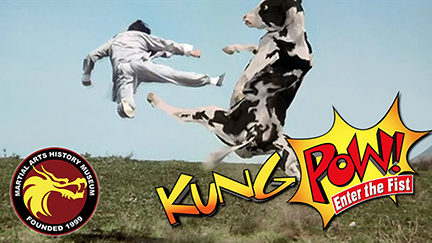 Burbank, CA – It has been estimated that nearly 90% of martial arts schools will close due to the continuous lockdown of our nation. The Martial Arts History Museum, now in its 21st year, is forced to find new ways to raise funds to keep its doors open. Since April 2020, the museum has been closed, and their largest fundraising event, Dragonfest, was canceled. Recently, the museum created a Facebook and in-person giving campaign, which has raised nearly $11,000 in the last three weeks. To further their efforts on a more consistent basis, the museum has just relaunched it’s Youtube channel to help.

Over the years, Youtube has paid people for having commercials on their Youtube channel. It was quite easy, however, in the last few years, all that has changed, and only those who meet their requirements will receive any type of funding.

That new requirement is for a Youtube channel to acquire 1,000 people subscribing to a channel and 4,000 viewing hours in one year.

So, we are asking you to help reach the one, primary goal, to become a subscriber. There is no cost to you whatsoever. You just click on the subscribe button one time and that’s it. Currently, the museum has 670 subscribers. We need just 340 more. This email is going out to 20,000 people, we hope just a handful subscribe and that will be tremendous.

Michael Matsuda, president and founder of the museum has been working with film star Cynthia Rothrock in creating her Youtube presence. So far, they have reached nearly 30,000 subscribers. Rothrock is so generously donated 50% of all funds brought in to help the museum.

“I’m going to be taking all I learned into the museum’s Youtube channel,” says Matsuda. “The goal is to focus on all things martial arts. Whether it’s about the movies, techniques, even Asian-theme topics and even Then and Now showcases, I think that will bring some attention to the channel for people to subscribe.”

“I am asking for your support. Just go to our Youtube channel and hit subscribe and watch our videos once in a while. The more you watch, the more funds we receive,” adds Matsuda.

To enhance their Youtube experience, the museum is placing several of its Museum Biographies up for a limited time for everyone to enjoy. The biographies are currently sold on Amazon but showing them for a little while may peak some interest in purchasing them.

HERE'S HOW TO SUBSCRIBE. It’s quick, it’s easy, and it will be a wonderful new way to help the museum through this rough and terrible patch in history.

My thanks to everyone. – Michael Matsuda