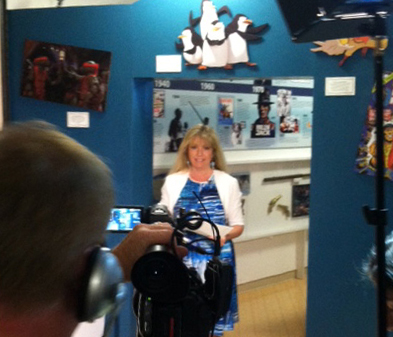 Burbank, CA – Making headlines this month for the art community is the Martial Arts History Museum in Southern California. PBS, one of the most respected channels for art, history and culture, selected the world's first museum for the martial arts to be featured in an upcoming episode next month on its LA ART program.

Maria Hall-Brown, one of the most celebrated hosts of the PBS SoCal line-up, served as narrator for the new episode. LA ART features artists, art leaders, and creative endeavors that voice perspectives of the many communities who call California home.

Through this local production, PBS SoCaL fosters cultural and community partnerships that embrace our region. Each LA ART episode features a local art story and several national stories, giving viewers intimate knowledge of their community’s art as well as a broad view of the wider world.

Although the show is only two years since its inception, it has been receiving rave reviews from the local community. “We all have to admit, Huell Howser was our primary source for new and interesting places to go, food to eat and the most unusual spots in California, I think LA ART is quickly becoming its own and having them come to the Martial Arts History Museum is something that people will appreciate.” says museum president Michael Matsuda. “The museum is a hidden treasure and besides that, it's the only one in the world, and it's in our own backyard. How great is that.”