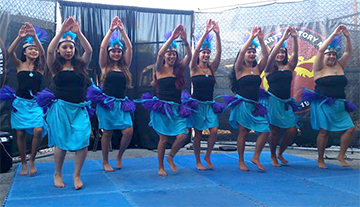 Burbank, CA – Last weekend, comedians, magicians, singers and even sumo wrestlers took part in the Martial Arts History Museum’s first 24-Hour Telethon. In an effort to raise funds to acquire a larger location to support the growing number of school visits, donors raised $7,000 over the weekend fundraiser, surpassing their $5,000 goal.

“This was a very exciting event for the museum. We held it at the museum and over 300 people came through our doors from 4 pm, Saturday through 4 pm Sunday. People gave of their time to support this great cause and it was a thrill to host it,” says museum president Michael Matsuda. “Every half-hour, we had musical performances, martial arts demonstrations, comedians, magicians, interviews, Hawaiian hula dancers and sumo competitor Americus Abesamis challenged visitors to toss him out of the ring.”

The Martial Arts History Museum is the only, permanent cultural facility in the city of Burbank. Celebrating its 18th anniversary, the museum opens the doors to young children in an effort to combat racism by bridging the gap between diverse cultures. Recently approved by the Los Angeles Unified School District and the Burbank Unified School District, the museum hosts thousands of kids every year. “We are experiencing growing pains and are in desperate need of a larger location. The telethon is one of our first steps in raising both awareness and funds to purchase a larger place still within the Burbank city limits,” adds Matsuda.

Along with a full weekend of entertainment, many of the local vendors offered their support by donating food, water and treats. “The event was a community effort. Burbank is considered the film production capitol of the world. We are surrounded by the Walt Disney Studios, The Burbank Studios, Warner Bros., Nickelodeon, The Cartoon Network and more. The only thing that Burbank does not have is anything in regard to cultural diversity. The Martial Arts History Museum brings that new awareness,” adds Matsuda.

Mayor Talamantes, the current mayor of the city of Burbank, also dropped into the museum to give a speech on supporting the museum.

Although the museum fundraiser has passed, their museum still requires a significant amount of donations to move into a larger facility and encourages supporters and fans to make a contribution to their cause.