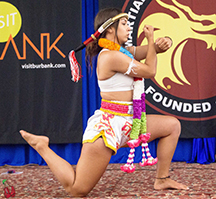 Burbank, CA – Celebrating its 14th year, the Martial Arts History Museum’s presentation of the Dragonfest Expo last week, was a huge success. Dubbed as the “comic con for the martial arts,” Dragonfest brought in nearly 3,000 spectators from across the globe and crowded the Pickwick Gardens Convention Center in Burbank to its capacity.

Dragonfest, considered the biggest martial arts convention in the world, returned to the city of Burbank this year with many rave reviews. “My wife and I are from Germany and we just got married and decided to make Dragonfest our first honeymoon stop,” notes a newlywed couple from Germany. “This was without a doubt, the most successful convention we have ever had,” notes museum president Michael Matsuda.

The expo is the biggest fundraiser for the Martial Arts History Museum as it hopes to raise enough funds over the next year to relocate the museum to a much larger facility but still remaining in Burbank. “Burbank is a great city. We brought the museum to Burbank and now we bring Dragonfest back to Burbank. It is our goal to keep the museum here and we are thankful for the support we have received for this event,” says Matsuda. “We brought in a lot of people from different countries, sold a lot of hotel rooms, many people ate in our diners, I think we bring a lot to this city and it is my hope, we will continue to receive their support.”

The event was topped off by a second day of actual, hands-on workouts with the likes of such greats as Benny “the jet” Urquidez, Don “the dragon” Wilson, Leo Fong, Felix Roiles, Lu Feng, Michelle Manu, Sifu Matthew, Vince Cecere, Robert Redfeather and Dr. Kam Yuen.

Plans for next’s years Dragonfest will include an additional, third day for all to enjoy. For info on Dragonfest, visit their site at http://www.Dragonfest.com.

For info on the Martial Arts History Museum, visit http://www.mamuseum.com or come by the museum at 2319 W. Magnolia Blvd., Burbank, CA 91506.