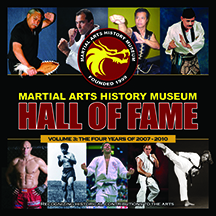 Burbank, CA – The Hall of Fame. Words that represent a lifetime of accomplishment. It is the epitome of a person’s journey as they overcame near impossible goals to make their mark in history. Considered as the official Hall of Fame for the martial arts, the Martial Arts History Museum is proud to announce the release the third volume of its Hall of Fame book series which is now available on Amazon.com.

The Martial Arts Hall of Fame is bestowed to those select few that have made a major impact throughout their entire career. It is a place where their legacy will be remembered for many generations. Recognized by the Martial Arts History Museum, the book series honors those unique individuals from all styles, arts and backgrounds who have made a monumental impact on martial arts history.

“This is our 3rd volume of the Hall of Fame series. Ten people are inducted each year (plus the Funakoshi Award).  Volume three covers the years 2007-2010, highlighting the careers of 44 individuals. Six pages are dedicated to each elite artist focusing primarily on what they did to change history, what they did to gain entrance into the hall of fame,” says museum president Michael Matsuda. “As baseball honors those significant achievers like Babe Ruth and Sandy Koufax, we have pioneers who didn’t just become champions and pioneers, but they changed the world. “

A collector’s item, the Martial Arts History Museum’s Hall of Fame series are the number one best sellers for the museum. It is both a reference book and a documentation of martial arts history. Volume one covered the years 1999-2002, Volume two covered the years 2003-2006 and this Volume covers 2007-2010.

It is available on Amazon through http://martialartsmuseum.com/museumstore/

John Corcoran, considered the greatest martial arts historian and writer, wrote the foreward for the book. Michael Matsuda, president of the museum, wrote the contents of Volume three. “So many amazing people sacrificed so much to bring their arts to the world. This book not only keeps that history alive, but shares it with the rest of the world,” adds Matsuda.

The Hall of Fame series, the best seller for the museum, can also be purchased at the Martial Arts History Museum at 2319 W. Magnolia Blvd., Burbank, CA 91506. Website: www.mamuseum.com

The museum is a non-profit 501(c)(3) organization and welcomes donations and financial support.