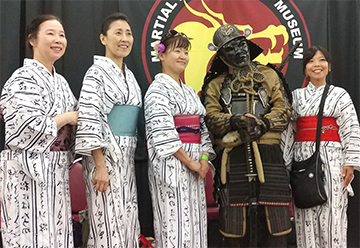 Burbank, CA – The Martial Arts History Museum’s biggest fundraising event of the year, Dragonfest, hits a record high of 3,200 guests for their three-day event in Burbank recently. Considered as the comic-con for the martial arts, Dragonfest celebrated its 15th anniversary with a packed house and a joyous time for all who attended.

“It’s was a dynamic time for everyone. People flew in from Germany, Italy, the Philippines and from many different parts of the world just to attend this event. One couple who came to Dragonfest from Germany on their honeymoon last year, were here again to celebrate their one-year anniversary,” says museum president Michael Matsuda. “It was the biggest event we ever had. We not only had a three-day event, but we nearly double the size of our venue and increased our vendors’ booths from 130 to 170.”

Dragonfest, which is currently hosted in the city of Burbank and sponsored by VisitBurbank.com and YuenMethod.com, has continued to move from larger venue to even larger venues in order to accommodate the growing crowds. For the last two years, it has been held at the Pickwick Gardens Convention Center in Burbank which fortunately, has additional rooms in which Dragonfest can grow.

“This was our 15th year and it was a big one. We grow as the audience increases and boy, did it increase. We continue to grow every year and everything, all the funds received, go to support the Martial Arts History Museum. This is what it’s all about, supporting the museum,” adds museum president Michael Matsuda.

A second stage was added which featured Question and Answer periods with martial arts icons and legends. The evening was topped off with a movie premiere.

“We also included a number of seminars and workshops so that people can workout with the celebrities and key figures in the martial arts. There were also school ownership seminars in which martial arts school owners can learn about youtube and internet marketing,” concludes Matsuda.

From such celebrities as Joe Mantegna, Obba Babatunde, Don “the dragon” Wilson, Cynthia Rothrock, Eric “the trainer,” James Lew and so many more, it was a fun day for all as funds were raised to support the growth of the Martial Arts History Museum.

Anyone can still support the Martial Arts History Museum by visiting their website at http://www.mamuseum.com and make a donation. The museum is a non-profit 501(c)(3) organization.