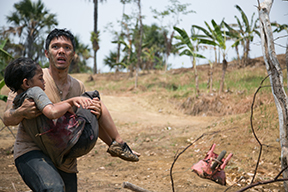 PASADENA, CA  – Winner of the International Film Festival, World Film Festival and Tokyo On-Line Film Festival, Earthbound is a heartfelt and emotional film that will inspire perseverance, dedication and spirituality. Based on the 2004 Indonesia Tsunami, this award-winning film follows the lives of a young family who becomes separated and their struggle to reunite. The screening will be held at the Laemmle Theater in Pasadena from May 12 through May 18. A Q&A by the producer will follow each screening.

Film entirely in Indonesia, this short-film explores the real life disaster that occurred on December 26, 2004 when a 9.0 magnitude undersea earthquake displaced a huge body of water of the coast of Indonesia which caused one of the most destructive tsunamis ever recorded in history. As a young family becomes separated, the woman struggles to reunite with her son, but most confront her own existence in her battle to revive him from beyond.

In the 2004 ocean tsunami, out of the 165,000 who died, one third of the victims were children. This 22-minute short film faces that disaster head-on and reveals how the human spirt can overcome it all, even a natural disaster.

Produced by Robin Shou, a star in over 40 Hong Kong action films and made himself a household name in Hollywood through his starring role in Mortal Kombat, began his research on the film in 2014, on the 10-year anniversary of the tsunami disaster. “This is a very passionate and spiritual film that reveals the messages that we are all alike. That it doesn’t matter what part of the world you are from, people are people. We are happy when things are wonderful and sad when things are bad and together we cry when we lose a loved one. It is a story of the triumph of the human spirit,” notes Shou.

As a special treat, Earthbound will be followed by the screening of MIKI. A film about an alcoholic Amerasian comic who reluctantly attempts to deliver his mother’s prayer bracelet to his estranged Jewish high school sweetheart (mikimovie.com). This film is written and directed by Weiko Lin. A Q&A with Shou and Lin will follow the screenings.

The Laemmle Theater is located at 673 E. Colorado Blvd., Pasadena, CA.Earthbound is also scheduled to be shown this June at the Martial Arts History Museum to support their efforts in raising funds for their new location.