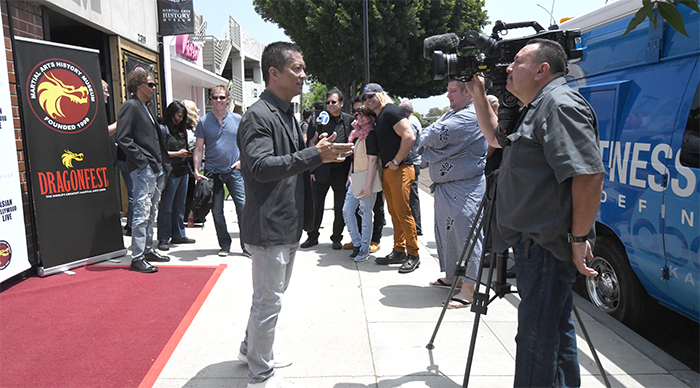 Burbank, CA – This week, the Martial Arts History Museum in Burbank teamed up with Eric the Trainer to give away 1,000 stun devices to the Asian community in their effort to combat Asian Hate. The museum was filled with celebrities such as taebo pioneer Billy Blanks, actor Peter Kwong and icon Joe Mantegna, tv host Jay Menez, and Burbank Mayor Jess Talamantes, to show their support of the museum and the Asian community.

Michael Matsuda, president of the museum, says that “this is not about fighting violence with violence; this is about providing a form of self-defense. The Asian community is being attacked, period. The small, finger-stun devices will at least provide some form of protection. Hopefully, they will never have to use it, but if they need it, they will have it.”

The devices given by the museum are small, finger-stun devices that anyone can carry. Although small, they pack a lot of energy to shock a would-be assailant. An anonymous donor provided one thousand of these devices to the museum to support them in this cause.

“We need to stop this now! We cannot sit idly by as our community is suffering. Because violent criminals are now released without any form of bail, they feel that they can attack anyone and get away with it, and they are. We need to have something that we can defend ourselves with. This may save someone’s life,” says Matsuda.

In addition to the stun devices, the museum feels that if we can also educate people about the positive contributions of the Asian community, that will play a role in changing the way people think about Asian Americans. “And that’s what we do at the Martial Arts History Museum. It’s not just about the punch and kick; we enlighten visitors about Asian art, music, history, and culture and its connection to the martial arts. We shed light on the positive influence of Asian Americans. This is an educational facility that bridges the gap of understanding of diverse cultures.”

This is why the museum is asking for the public’s help in raising $5 million to relocate to a larger facility. “That is our goal, to move into a 15,000 square foot facility. To have a theater to host conferences, discussions, movie screenings, and a big enough area for school visits. The school district required at least 90 kids in order to rent a bus to visit a museum. We are not big enough for 90 kids, so we have to turn them down. Picture this; the Natural History Museum brings in close to 5,000 kids a day. Imagine the positive impact we could make on the children if they learned about the Asian culture?”

For more information about the museum or to donate, visit their website at MAmuseum.com.

“We are still giving away stun devices until we run out; however, we ask the public to visit the museum first. That’s like seeing a movie matinee and getting a stun device on your way out,” concludes Matsuda.

The Martial Arts History Museum is the only one of its kind in the world, and by expanding, it can do more to combat Asian Hate and tear down the walls of racism and prejudice.