The Businesses Most Damaged by the Covid Lockdown, the Martial Arts Schools 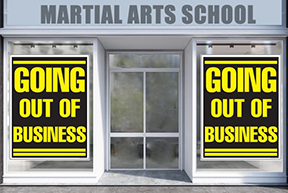 LOS ANGELES, CA – Perhaps the hardest hit businesses as a result of the Covid-ordered shut down; are the martial arts schools. Since the governor of California ordered the lockdown of certain businesses a year and a half ago, over 80 percent of the martial arts schools, which no longer had any source of income, could not continue their rental payments and had to close their doors permanently.

“While most people feel sorry for the restaurants which were only ordered 'no in-door seating,' they were still allowed to sell take-out meals and set up for outdoor eating, it was the martial arts schools that were hurt and in most cases, beyond repair,” notes Michael Matsuda, president of the Martial Arts History Museum.

Many historical martial arts studios, which had been located in the same location for over 40 years, were forced to close their doors because of their inability to pay their rent or mortgage payments.

In April of 2020, hand-picked “necessary businesses” such as grocery stores, hardware stores, liquor stores, clothing stores, shoe stores were allowed to remain open. Meanwhile, gyms, churches, dance schools, theaters, museums, and martial arts schools were ordered to be shut down. Since nearly all of the martial arts schools are “mom and pop” industries and are entirely dependent on school enrollment, they were unable to keep their doors open.

“Granted, if you were able to afford a large number of mats, which are very expensive if you price them, and you had a parking lot that was big enough to safely hold the courses outside, you could remain open. However, most students choose not to continue working out rather than bearing the outside elements,” adds Matsuda.

So what happened to the martial arts schools? The majority shut down completely, 80 percent of them. Others had to open garage schools with very limited students, and others are now teaching in the park. Most instructors, however, have given up teaching completely.

“My friend told me just yesterday that she is trying to find a martial arts school in Sacramento, but when she tried to contact them, they were all closed down,” says Matsuda.

“This article is not a woe-is-me piece, but a method to bring awareness to an industry that has been devastated the most, but with the least bit of attention,” concludes Matsuda.

Matsuda is the president of the Martial Arts History Museum located in Burbank, CA. MAMuseum.com.