The Martial Arts History Museum to Host a Special VIP Screening of the Highly Anticipated “Arena of the Street Fighter” for Martial Arts School Owners and Celbrities at 6pm on Saturday, May 4th, 2013 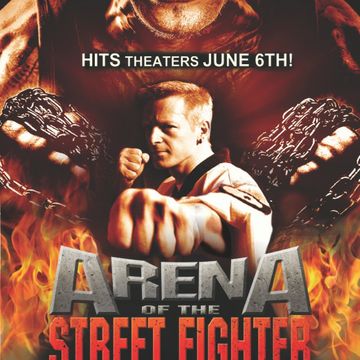 and Martial Arts Show Biz TV have teamed up to promote the highly anticipated film “Arena of The Street Fighter” to audiences throughout the United States in 2013.

The vicious and blood thirsty "Slater" runs the most violent gang in the land. There are those who dare not to join gangs; like Mike and his friends. But when Mike's brother is killed; he will fight to take vengeance on those who killed his brother & end their reign of violence in "Arena of The Street Fighter".

Issac Florentine (Director of Undisputed 2 + 3 and Ninja.) hails the film's star, Mike Möller, as "the European answer to Jet Li and Tony Jaa..." The film features "Some of the most spectacular fights around! These guys know how to deliver top class action" exclaims Scott Adkins (The Expendables 2, Ninja).

The non-stop Martial Arts Action is a perfect fit for Martial Arts Entertainment Media's various and well known platforms. Danny and Theresa Zaino, hosts of Martial Arts Show Biz TV will personally cover some of the key release events during the June 2013 Theatrical release in Los Angeles. Theresa Zaino confirms, "We are excited to team with Gorilla in bringing a movie with this level of Martial Arts Action to American Audiences". Danny Zaino in his direct fun loving style says, "This movie won't win an Academy Award, but it's Bitchin'... Love it!" And Gorilla Pictures' founder Bill J. Gottlieb states, "We're thrilled to have the Zaino's full-throttle, fun style of story behind the story brand of promotion behind this movie."

The Internationally known Martial Arts History Museum is hosting the VIP Screening event (which is the first preview of the film on the west coast) for Martial Arts school owners and celebrities.   The museum’s founder and president, Michael Matsuda has endorsed the movie and says, “Arena is the best action import from Germany – EVER – it’s Martial Arts at its best and we are very proud to be part of the launch team for this incredible movie!”  Tradionz Apparel and Don “The Dragon” Wilson (11 time kick-boxing world champion) are sponsoring the VIP Screening event at the museum.  Don is passionate about the film and says, “If you love action…this movie delivers!”

The film was awarded "Best Action Film" at the Sarasota International Film Festival & continues in Festival competition in April 2013.  See the trailer at www.streetfighterthemovie.com.

“Arena of The Street Fighter” hits theatres on Thursday, June 6th with a coast to coast release.  To view trailer go to streetfighterthemovie.com.

Gorilla Pictures was founded in 1999 alongside Gorilla Digital by award winning on-air promotions leader Bill J. Gottlieb with the intent to develop high quality feature films. After an extensive career in commercial writing and production, Gottlieb was well prepared to move into the world of film. Focusing on a combination of action and animation has made for a winning formula for which Gorilla Pictures’ films can currently be seen in theaters, as well as in broadcast and on DVD throughout North America and Europe. For more information, visit www.gorillapictures.net.

Martial Arts Show Biz TV, Radio and Magazine's goal is to provide the best possible way to reach customers with their powerful media packages that offer Radio, Magazine, TV, and explosive E-News Email Campaigns all designed around clients' advertising needs. Whether you are the Producer of a Movie, TV Show or Commercial, Promoter of a Martial Arts Tournament, Instructional Seminar, Training Conference or Hall of Fame, or a Martial Arts Business that offers products or services to the martial arts community, Martial Arts Show Biz TV, Radio and Magazine can help reach the widest audience.