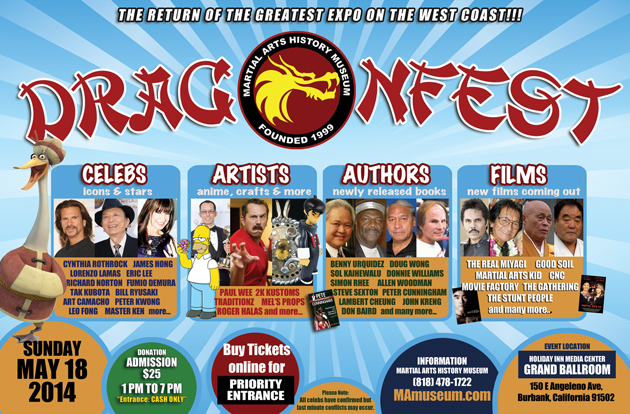 Burbank, CA – The city of Burbank prepares to host the largest martial arts convention on the Western coastline. Referred to at the Dragonfest Convention and hosted by the Martial Arts History Museum, is set to draw in thousands of martial arts enthusiasts, fans and lovers of the kung fu theater genre. Dragonfest will be held in the grand ballroom at the Holiday Inn Media Center this Sunday, May 18, 2014.

Dragonfest, which was hosted in the city of Glendale and ran for nine years, has passed the torch to the Martial Arts History Museum and makes its new home in Burbank. The expo, which only costs $25, will feature some of the greatest martial arts icons, pioneers, champions and film personalities. “This is a huge event for Burbank and for the Museum, this is our biggest fundraiser of the year,” says Martial Arts History Museum president, Michael Matsuda. “For some, this is a reunion, for others, it’s a chance to meet their icons up close, and for others, it’s a wonderful way to learn about new martial arts films, projects and much more.”

New films will also make their debut including the CNC Movie Factory, ShowVIS, The Gathering, The Stunt People and Traditionz’s Martial Arts Kid. In fact, a scene from The Martial Arts Kid will actually take place at Dragonfest.

The artistry of the arts will include such notables as Emmy-Award winner for The Simpsons Paul Wee, Mel’s Props, Ed Parker Jr., Jerome Lu, Justin Waggle, 2K Kustoms and Traditionz t-shirts.

“As an added bonus, we are proud to feature Master Ken, a martial arts comedian and an internet sensation and Nick Palma, one of the original Ninja Turtles who will be walking around greeting guests,” adds Matsuda.

The Dragonfest Convention will take place at 150 E. Angeleno St., Burbank, CA at the Holiday Inn Media Center. Entrance is cash only. The event begins at 1 pm and ends at 7 pm. The Martial Arts History Museum is a non-profit 501c3 organization and this event is a fundraiser for the Museum.