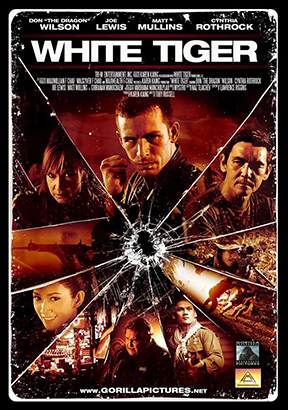 Burbank, CA – The latest martial arts film to hit the market is White Tiger. Filmed entirely on location in Thailand, this new action-packed movie includes some of the greatest martial arts champions of all time. Kickboxing legend and action star Don “the dragon” Wilson, “queen of the martial arts” Cynthia Rothrock and the “father of full-contact karate” Joe Lewis. The star-studded premiere will be held on November 20 at the Charlie Chaplin Theatre of Raleigh Studios in Hollywood, CA.

Produced by Tri-M Entertainment with executive producer Karen Kaing, this film takes audiences into the exotic jungles of Thailand and the bandlands of Bangkok. It is a story of a young American with a bounty on his head who must avenge the unjust death of his mentor.

The is the last film of the late Joe Lewis who passed away a short time after filming was completed. “This will be a memorial to Joe Lewis and what he has done for the martial arts,” says Kaing. “The film is full of revenge and payback and having Don Wilson and Cynthia Rothrock in the picture is amazing.”

As part of their premiere, Tri-M Entertainment will be donating a portion of their proceeds of the premiere to the Martial Arts History Museum. “Martial arts, Asian films and action films do wonderful things for the martial arts community and the Museum is always willing to support many of these films and I am happy that people are giving back,” says Museum President Michael Matsuda.

The Hollywood Premiere will take place on November 20 at 7 pm at Raleigh Studios, Charlie Chaplin Theatre, 5300 Melrose Ave., Hollywood, CA. Information about this event can be found at www.whitetigeractionmovie.com. For tickets to the purchased from this link: https://www.eventbrite.com/e/hollywood-premier-for-white-tiger-action-movie-tickets-19126797767.