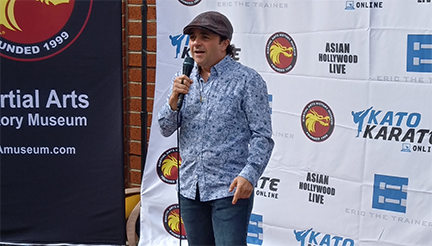 Burbank, CA – To bring awareness to the growing problem of bullying, yesterday, the Martial Arts History Museum hosted “Karate Chop Bullying,” an event that featured some of Hollywood’s biggest action stars in an effort to combat bullying.

Michael D. Cohen, star of the hit television “Henry Danger” series, noted that he was bullied, and after he learned the Japanese martial art of Judo, he was never bullied again. 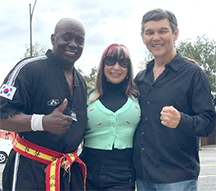 The event featured a spectacular martial arts demonstration from the king of Taebo, Billy Blanks, along with his students. Blanks, who suffered from dyslexia, was frequently bullied when he was young until he learned martial arts.

The day, which was the brain-child of Eric the Trainer, one of Hollywood’s most celebrated fitness trainer, put together the entire festivity as he talked about his personal experience with being bullied.

Michael Matsuda, president of the Martial Arts History Museum notes that “bullying is completely different than it was when I was a child. Today, social media has turned up bullying to its highest damage point. It’s easy to say horrible things about someone online without any regard for what they are doing to them. I believe martial arts is the best way to combat bullying. Martial arts not only give you the tools to protect yourself physically, but it gives confidence and inspires personal growth.”

Especially since covid, so many young people have been unable to be with their friends, so they focus most of their time on social media. And with that, bullying online has increased.

Cynthia Rothrock, the “Queen of the Martial Arts” also spoke about being bullied when she was young. Film star Don “the dragon” Wilson, who is half Japanese, was continually bullied and taunted back in the early 1960s because of his race.

Tim Flynn, the owner of Kato Karate Online was the main speaker addressing the problem of bullying nationwide. Considered one of the biggest advocates for anti-bullying, he addressed the audience by reflecting on his experience and what people can do to combat this problem.

“It’s important that the museum be an essential part of the Los Angeles, Burbank, and Glendale community. That is why we do so many humanitarian events. From our anti-Asian Hate Day, in which we gave out 1,000 finger stun devices to address problems like this bullying. We ask everyone to come on board and help the museum raise at least $5 million to secure a larger location. Yesterday it was raining, but thankfully it let up enough for us to host this event. We could hold all these things inside if we had a larger facility. Imagine the number of humanitarian events we could do,” says Matsuda.

For more information or to make a donation to the Martial Arts History Museum, visit MAmuseum.com or call (818) 478-1722.