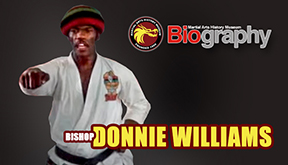 Burbank, CA – The Martial Arts History Museum is proud to release its latest biography, the life of one of the founders of the Black Karate Federation (BKF), Donnie Williams.

Now a Bishop, Williams played a key role in forming one of the biggest organizations for helping the African-American community back in the early 1970s. “The early 1970s was a tough time for the Black community, and the BKF provided karate lessons for young Black kids who couldn’t afford it. The BKF also created a voice for Black fighters on the tournament circuit, and at the time, it was the biggest federation in all of the martial arts,” notes Bishop Donnie Williams.

Because of his fun and fury combination while competing on the karate tournament circuit, he earned the nickname “Clown Prince of Karate.” “Donnie Williams was one of the toughest fighters in the entire tournament world. He was fast, and he was indeed, very furious. A winner of countless grand championships, he graced the cover of many magazines, and in 2003 he was inducted in the Martial Arts History Museum’s Hall of Fame,” says Michael Matsuda, president of the Martial Arts History Museum.

Williams also dabbled in the film industry playing a variety of roles including The Circle of Iron, A Force of One, Black Belt Jones, Bruce Lee: The Man, The Myth, and his most popular role, Enter the Dragon. “I was in Enter the Dragon for only a few seconds, but everyone knows me for that role,” adds Williams.

The biography is an in-depth look at this icon's life and the impact he made on history, and how he helped form the BKF. “The plan is for this and many other biographies to be part of the Museum’s Hall of Fame Wall. This way, 50 to 100 years from now, people can see his biography and understand the impact he made. We are looking for funds to help expand the museum to include this area,” adds Matsuda.

Williams is the Bishop of the Family Church International, which is headquartered in the city of San Fernando, CA.

The Donnie Williams biography can be viewed on the Martial Arts History Museum’s Youtube channel at the following link: https://www.youtube.com/watch?v=O4K-atLfP_o&t=3s

Or, it can be purchased on Amazon at the following link:
https://www.amazon.com/Biography-Donnie-Williams-Michael-Matsuda/dp/B086Y562ZH/ref=sr_1_1?dchild=1&keywords=donnie+williams+biography&qid=1613043720&sr=8-1

To make a donation or to find out more about the Martial Arts History Museum, please visit the link here: http://www.MAmuseum.com